The Modewarre Avenue of Honour commemorating the sacrifice of locals who fought in the First World War was originally an avenue of elms planted on 28 June 1918.  Included was a tree for General Birdwood, Commander of Anzac troops and a tree (number 33) dedicated to Albert Jacka, born in Modewarre who won Australia’s first Victoria Cross at Gallipoli. In the mid-1940s all but one tree of the avenue was replaced with the existing 32 cypress trees. The one surviving elm tree is number 33, the one dedicated to Albert Jacka. 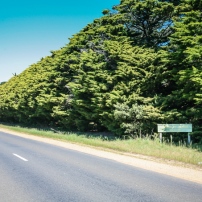 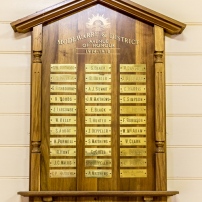 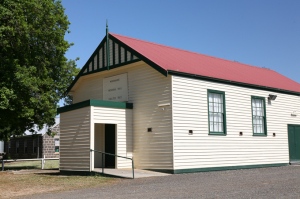 The Modewarre Memorial Hall was opened by the Hon. A.A. Austin, M.L.C on 21 April, 1923. The building itself cost £800 was erected by McHarry and Son of Moriac. The main hall was fifty feet by twenty-five feet, and there were two smaller rooms at the rear. The hall was erected on a half-acre allotment donated by Mrs. John Hortip of Modewarre.

Inside are the memorial brass plaques with the soldiers names relating to the Avenue of Honour and the Roll of Honour. 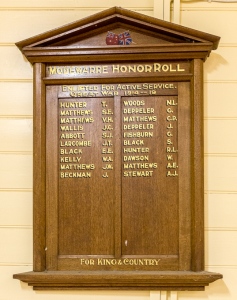 The Geelong Advertiser (28 May 1918 p5) reported that 200 residents attended the school to celebrate Empire Day and to witness the unveiling of the honour roll which had been placed in the school to honour the twenty young men who were all residents of the district at the time of enlistment. Mr. D. McLennan, M.L.A performed the unveiling. 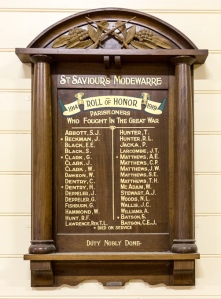 On April 9th 1922 the honor board at St Saviours, Church of England, Modewarre was unveiled. The board which is made of blackwood and has carved upon it a spray of wattle, has a fiddleback panel bearing the inscription “St. Saviour’s Modewarre, Parishioners who fought in the Great War. Duty Bravely Done.”