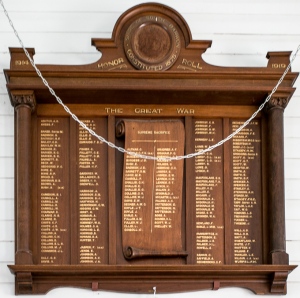 The South Barwon A.I.F honor roll with 195 names of those who enlisted from the district was unveiled on 6 November 1921 by Mr. Lister, M.H.R. and a captured German machine gun was placed in position by Mr.E.Morley, MLA. The honor board is a unique design made from blackwood. In the centre is an scroll with the names of the 45 shire soldiers who died in the war. The names of the men who returned are inscribed on each side of the scroll. The machine gun was placed on brackets just beneath the honor board. 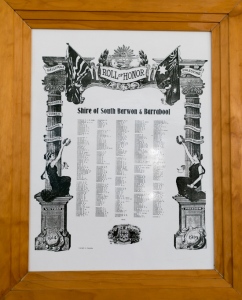 A copy of a poster with the combined Barabool and South Barwon Shire names of those from the districts who served in World War One.