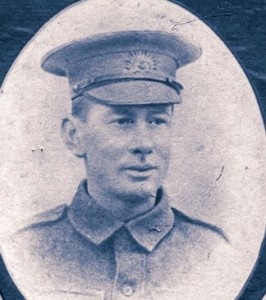 George, was born at Mt Duneed and attended Mt Duneed State School before completing his education at Theological Hall, Ormond College, Melbourne. Prior to enlisting he had been a Presbyterian clergyman at Boort, his first ministry, for four years. He joined the AIF at the rank of Private on 8 January 1915 having had 3 years’ experience at the Rifle Club. He was attached to the 14th Battalion, 6th Reinforcements and trained at the Broadmeadows camp during which time he was promoted to Acting Corporal. The unit embarked from Melbourne aboard HMAT A62 Wandilla on 17 June 1915 bound for Egypt then the Gallipoli Peninsula joining the rest of the battalion at Reserve Gully on 2 August. By this time the 14th Battalion had become known as “Jacka’s Mob” –  being led by Albert Jacka (Modewarre birth place and first Victoria Cross recipient). They spent the next few days preparing for the next offensive which was to become known as the Battle of Lone Pine. As well as supplies and sharpening of bayonets the troops were ordered to wear white bands on both arms and a white patch on their backs near right shoulder as distinguishing marks. Four days later the offensive started and the 14th Battalion moved with difficulty off the hill and down the gully to Beach Road. There were some casualties during the move. On 8 August, the 14th Battalion moved out in single file in the rear of the 15th Battalion and crossed Kaiajik Dere and then deployed in lines across the ridge in the attack of Hill 971 as part of the Lone Pine offensive. An advance was made under heavy rifle and machine gun fire consequently there were many causalities. George was one of 128 men who were missing from the 14th Battalion as a result of this offensive. The hill was taken at great cost, although Turkish reinforcements forced the Australians to withdraw. Five days later 6 men rejoined the unit, one of which may have been George as he did make it back to his unit some time before the next big offensive.

During the attack on Hill 60 on 27 August George was in the fighting line. His service record indicates he was wounded in the back, arm and foot subsequently admitted to hospital in Alexandria on 30 August. Five days later he succumbed to the wounds he received in action and was buried at Chatby War Memorial Cemetery, Alexandria.

The Bendigonian (18 May 1916) reports that two of George’s comrades Corporal O’Cain, and Private Woistenholme who held George in high esteem sought to catch up with his brother Rev. John A Stewart to give him details of his brother’s fatal wounding at Gallipoli. “During the attack on Hill 60 on the 27th August, Corporal Stewart was in the fighting line. He was fifty yards from the Turkish trench when he was wounded with shrapnel on the body and with a bullet in the right foot. After being wounded, Corporal Stewart was seen praying with a dying comrade, and whilst in this act he met with the wounds that proved fatal. After Major Gillison’s death an application was made that Corporal Stewart be appointed a chaplain, but before a decision could be reached to this appeal of the captain, the attack on Hill 60 was made, with fatal results to the brave soldier, Corporal Stewart. During the attack on Hill 971, on 8th August, Corporal Stewart was seen helping to bring in the wounded, getting water from a well, and praying with the dying, being unarmed at the time. Corporal. Stewart reached Alexandria on 30th August, and was admitted into the General Hospital there. He was attended-by Chaplain Rankin. He was extremely weak, as three of his wounds were severe, the left arm and right foot being badly shattered. He lived for six days in the hospital, but suddenly collapsed on 5th September, 1915.”